I was recently contacted with a request to review Dark Melodies an anthology of (ahem) darkly lyrical short stories by the critically praised William Mekile – and because I happen to be a huge fan of anthologies and short fiction in general, I jumped at the opportunity.  Seemingly only a few short hours later, I had a PDF copy of the book in my inbox. 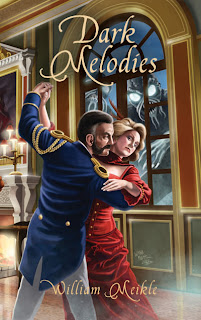 First of all, and unlike many anthologies, the collection of stories in Dark Melodies is cohesive – meaning that while they are clearly separate entities, they all have a similar mood and feel – clearly a lot of thought went into keeping the content coherent and purposeful.  And the purpose, it seemed, was to transport the reader to a darker, more introspective and bewitching realm.

Dark Melodies consists of eight stories, of which six are previously unpublished.  My undisputed favorite had to be The Persistence of Memory – and there are several reasons for this.  Perhaps the biggest reason is that I could see myself as Betty, making the same decisions she did – and ending up in the same place.  Even knowing ahead of time what would happen to me (which she didn’t) I would have been unable to stop myself from going down the same road – just in case I was wrong and could be reunited with the one person I’d built my life around.

While The Persistence of Memory was my favorite story in the Dark Melodies anthology, all of the stories were very strong and captured my attention – each in their own way.

While I know that anthologies aren’t for everyone, if you are a fan of the style – and of dark fiction that isn’t full of slashers and vampires, but chills you in a more subtle, supernatural manner – Dark Melodies will certainly be an entertaining, escapist journey for you.  You can read it a story at a time, or (because it is under 200 pages) you can devour it in one sitting.  4 out of 5 stars.
Posted by Unknown at 3:13 PM 9 comments:

"The Haunted" by Bentley Little

So I am a big fan of Bentley Little - admittedly his earlier stuff is quite a bit better than the last few novels he's written, but I am not ready to write him off yet, either. I mean, this guy can sling straight-up horror like nobody writing today when he puts his mind to it, and he has written some of the best short stories and anthology contributions I have ever read (his Pop Star in the Ugly Bar is totally wretched and amazing - one of my personal favorites) and the dude is nothing if not prolific (I have made it a point to search out and snag any old copies of The Horror Show magazine that I can find on the off chance that I'll find some of his earlier stories that I haven't read yet.) Rarely have I come across something he's created that I truly didn't like, but I will admit that his last couple of novels (His Father's Son and The Disappearance) were easily among my least favorite.

All of that being said, I was really excited for The Haunted. I hit my local book store first thing on the 3rd, and I made the poor bookseller go dig around in the back for a copy of the book when I realized they hadn't made it onto the shelf yet. And I read it in a single setting.

The Haunted is the story of the Perry family, who decides to upgrade their living situation by moving into a home in their city's historic district - ultimately this proves to be a bad decision as they find themselves sharing their space with a pretty malevolent presence. While I have to agree with previous reviewers that the story pretty much followed the standard haunted house sequence of events, in my opinion, that wasn't necessarily a bad thing. The actual progression of the haunting is only part of the story, and Little spends a good portion of time focusing on the psychological damage that living in an obviously haunted house does to the various members of the family as well - not to mention that many of the things that happen are pure, unadulterated Bentley Little - and that the book is written in his chill but intelligent style which makes it totally readable and even really funny when he wants it to be. Also, there is a well-incorporated back story that explains why what is going on is going on, which is just as interesting as the main plot.

When all was said and done, I liked The Haunted a lot. It kept me entertained, was scary enough, and I was satisfied with everything about it. Was it as brutal and horrifying as The University or as intelligent as Dominion? Nope. But it was solid, and far and away better than Little's last couple of books. If you are a fan of Bentley Little, you won't want to miss this one. And if you're not a fan yet, The Haunted is a decent place to acquaint yourself with Little's distinct horror flavor. 3 ½ stars.
Posted by Unknown at 12:38 PM 6 comments: 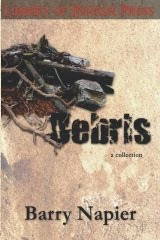